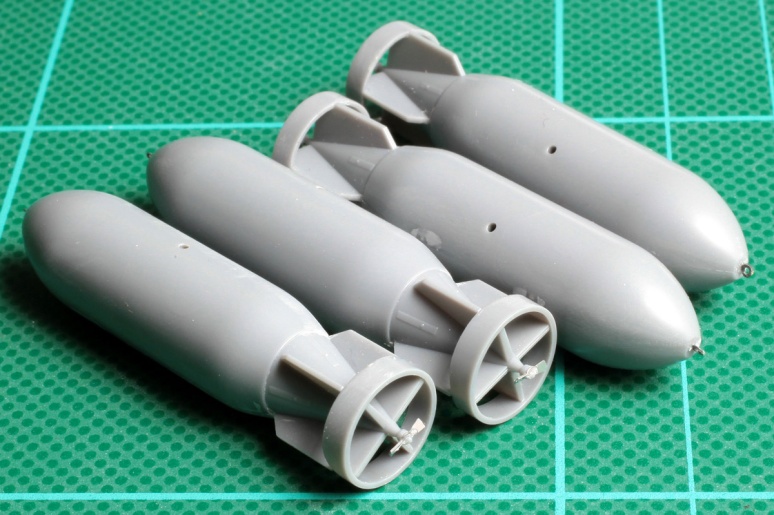 Kit bombs with a little extra detail. The kit’s fusing prop blades were given a twist to add some pitch and small rings from the P/E spares drawer were added to their noses. 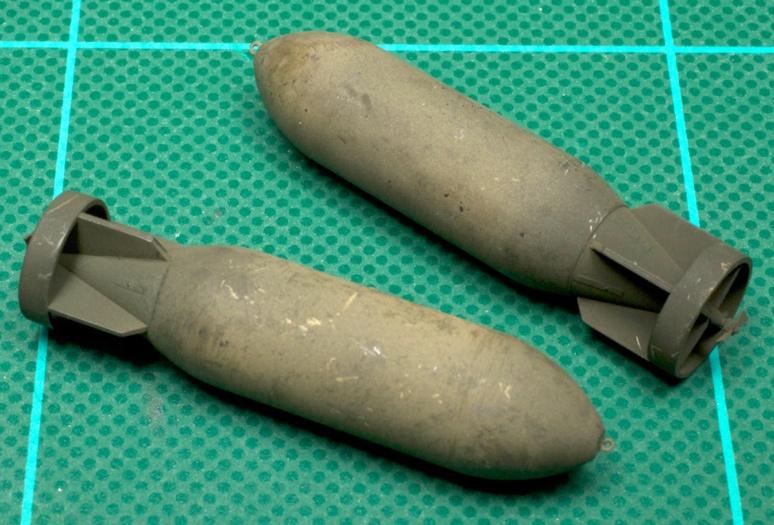 The bombs were first given a coat of Tamiya XF-61 Dark Green. Then, with the airbrush pressure turned right down so the paint would spatter, a very thin mix of Tamiya XF-59 Desert Yellow was unevenly sprayed over the front three quarters of each bomb. Lots of scuffs and scratches were then added using various coloured pencils.

The main gear doors, which had already been painted by Brett, were weathered with an oil wash to the silver interior and some careful airbrushed shading and streaking to the grey exterior.

I decided to replace the kit’s clear plastic supercharger intake guards with scratch-built items made using  .010 x .030″ Evergreen plastic strip and some fine P/E mesh, again from the spares drawer.

Once painted and fitted to the model they looked pretty good! 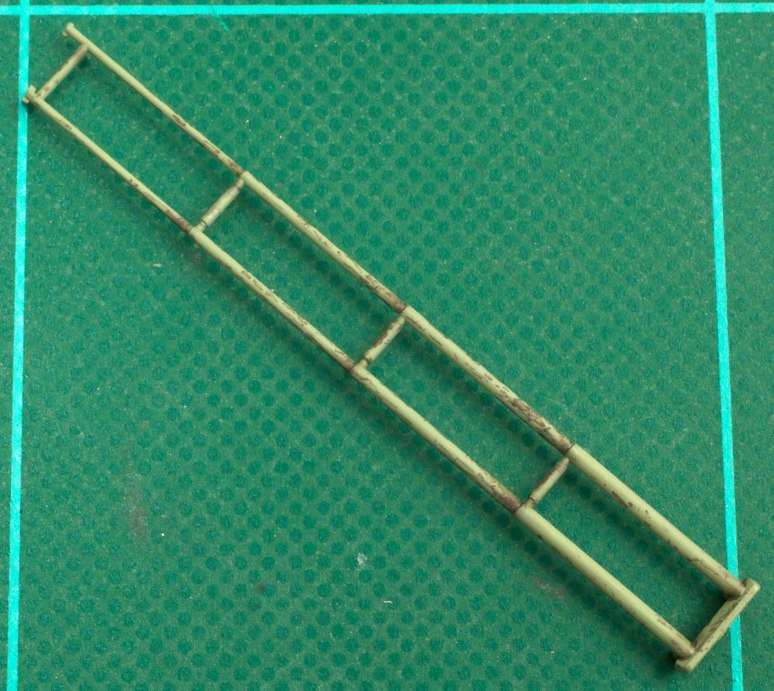 The boarding ladder was painted using my mix of British interior green and given lots of scratches with a mix of dark grey and red brown. 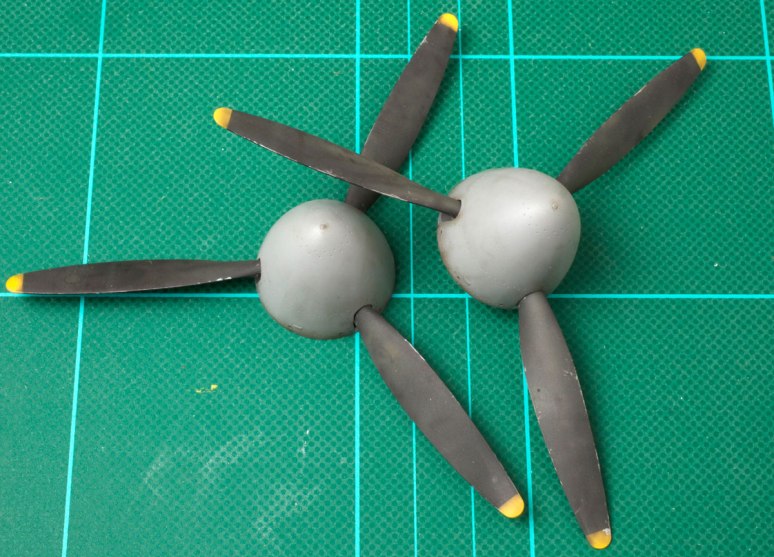 Once painted black with yellow tips, the prop blades were weathered using the same, thin, Desert Yellow mix used on the bombs. Scratches were applied to their edges using a Prismacolor silver pencil. The prop hubs were dirtied up with my black/brown mix.

When the model was handed over to me the main construction had been completed by Brett Green. Brett had also masked the canopy frame and given the whole model a good coat of Tamiya AS11 Medium Sea Grey straight from the ‘rattle’ can so all I had to do was add the dark green camouflage. The outline for the green cammo was carefully sprayed freehand maintaining as tight a line as I could. A rough squiggle was then applied so I could easily see which side of the lines I had to fill in with the main coat. Spraying on the wrong side of the line is an easy mistake to make and it’s a mistake I have made plenty of times in the not so distant past!

My choice for RAF dark green is always Gunze Sangyo H330. I know this is not the recommended colour for WW2 RAF aircraft but it’s the one I prefer to use. 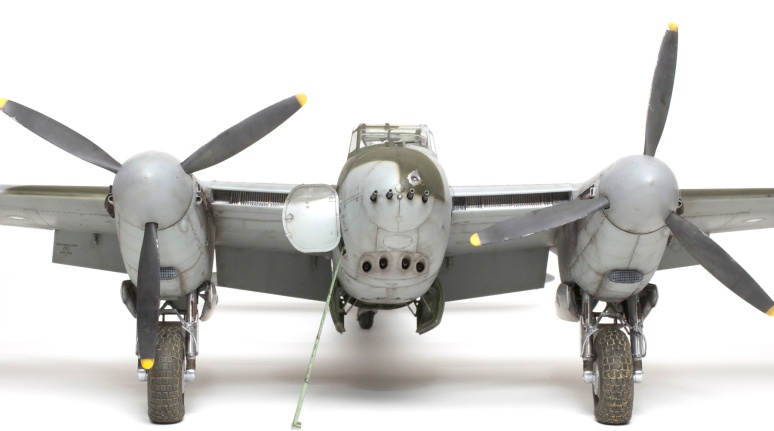 The area around the gun camera port was sprayed silver and then masked off with a small square of masking tape before the main green coat was applied. Once the green had been sprayed the mask was removed and the edge between the two colours was roughened up by some careful chipping of the green paint with the sharp end of a wooden toothpick. 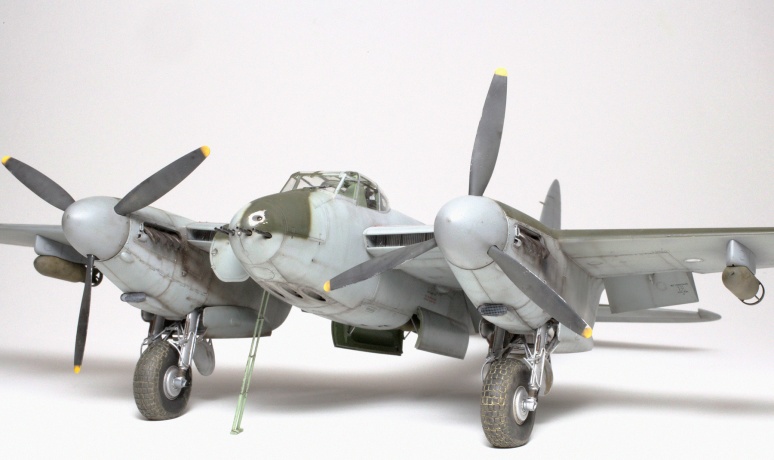 Gun dust, exhaust stains and general grime were all added with the airbrush and a very thin mix of Tamiya red brown and flat black. The tyres were given a very watery wash of Tamiya XF-59 Desert Yellow.

Group Captain P.C. Pickard and his navigator Flight Lieutenant J.A. Broadley RNZAF were both killed at the end of the Amiens raid when this aircraft was attacked and shot down by a Focke Wulf 190 of JG26.

These last two photos were taken by Brett and will appear in his latest ‘How To Build’ book.