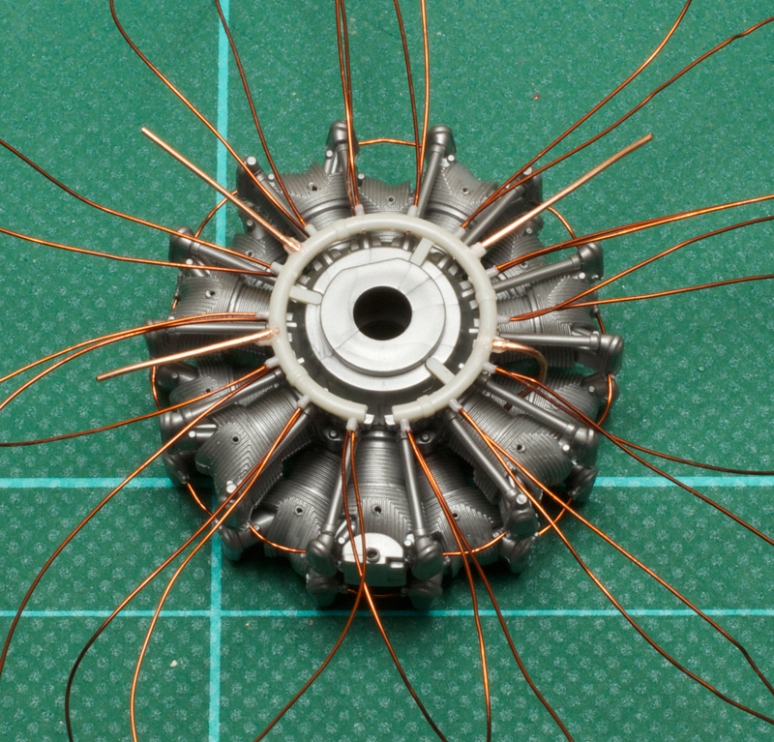 The first step in my order of construction (step 40 in the kit instructions) was the beautiful little Nakajima ‘Sakae’ Model 12 engine. Here I have added a wiring harness and some other plumbing using various gauges of copper wire. 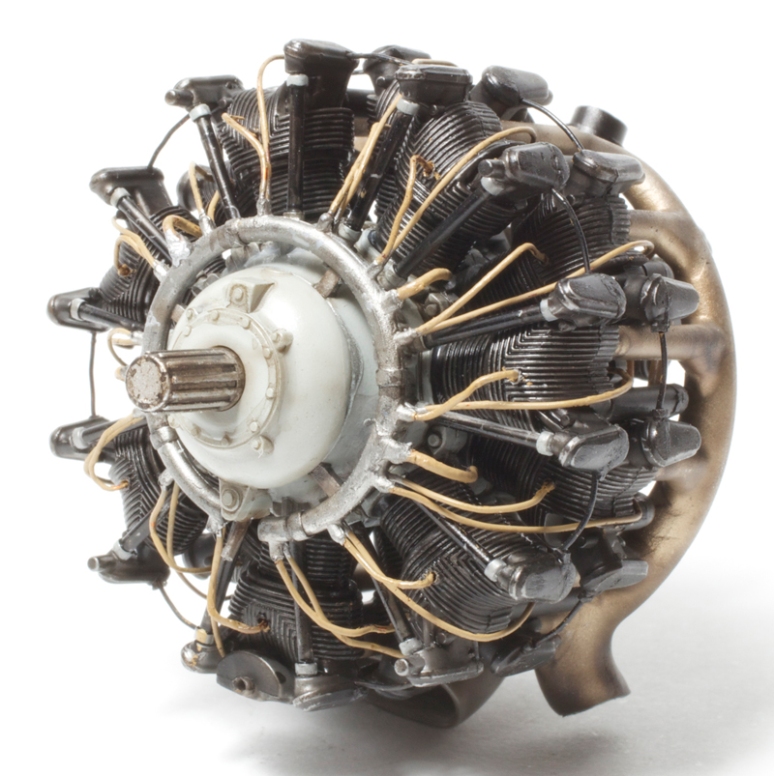 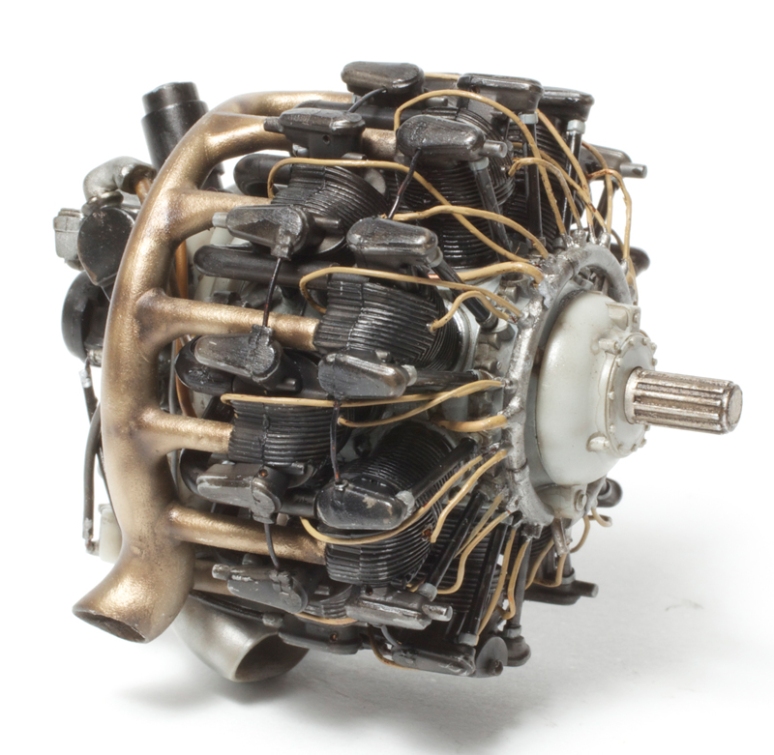 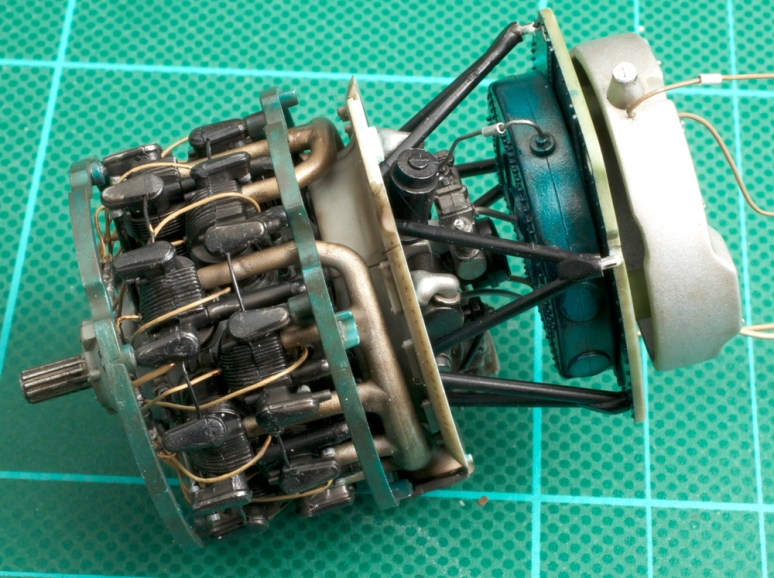 The engine fully painted, assembled and ready for installation. The firewall, with its oil and fuel tanks attached, is only dry-fitted to the engine mount at this point. 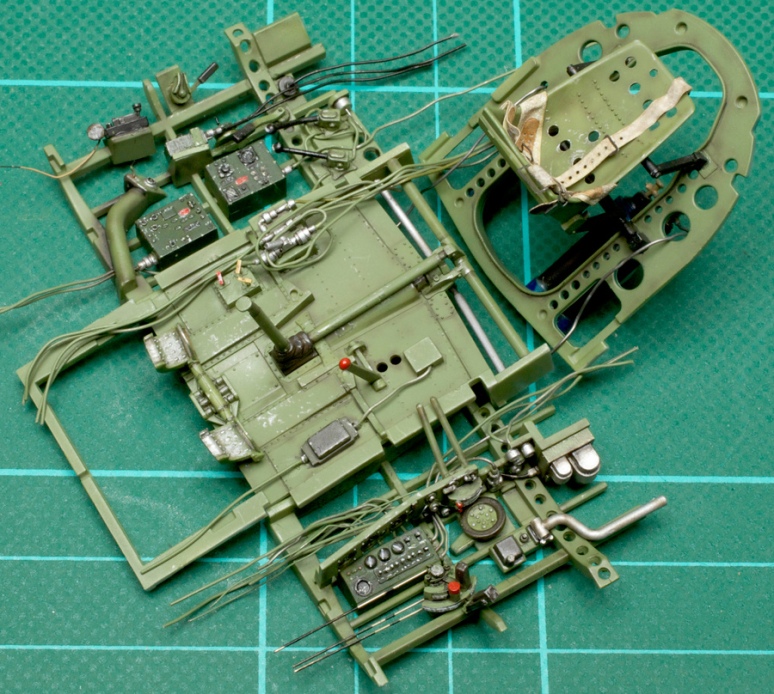 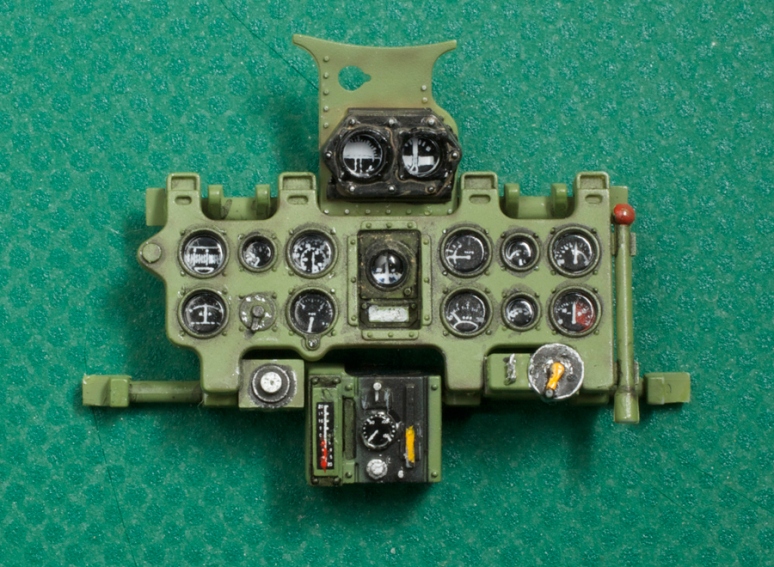 The instrument panel was next. 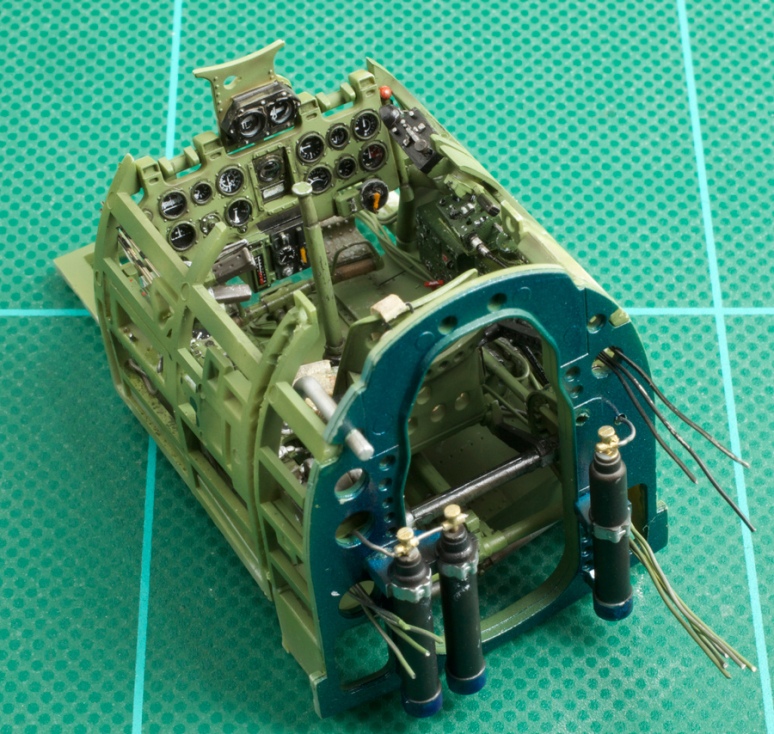 Cockpit module complete and ready to be installed. 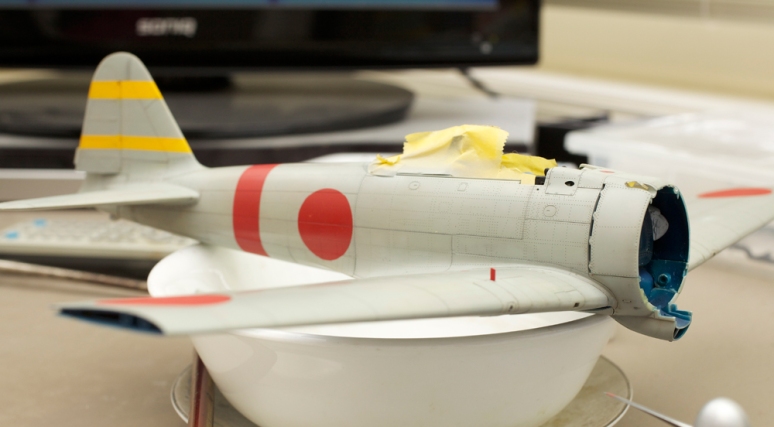 With the interior components installed, the main construction was completed and painting commenced. After the application of the main cammo colour of Gunze H61 IJN Grey was completely dry, the weathering process began. This was commenced by carefully running the very sharp point of a 6B graphite pencil along and around all panel lines and fastener screw heads. These rather dark lines were then muted down by very carefully over spraying them with a thin mix of IJN Grey with a dash of my black/brown mix added. Before this colour was completely dry the entire surface of the model was polished using a few drops of water and the second finest Micromesh cloth. This formed a slurry of the shading colour which was wiped away using a soft cloth leaving this slightly darker, subtle colour in the recessed surface detail. After this process was complete I decided to mask and spray all the national and tactical markings and the wings’ red ‘Don’t Step’ safety lines. Once this was complete I very carefully polished the entire model using the finest Micromesh cloth. This gives the model a beautifully even, glass-like sheen. 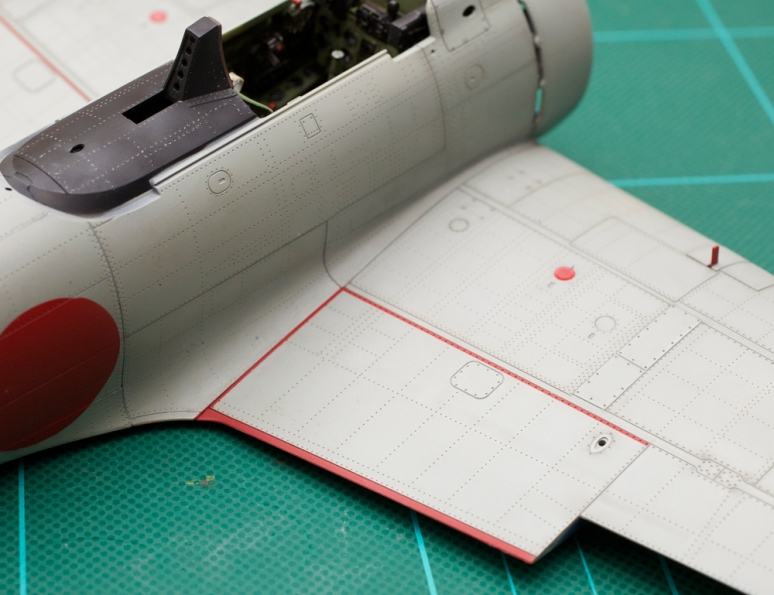 The sprayed red safety lines. Also in this shot can be seen that each rivet on the rear cockpit combing has been carefully dotted with a Prismacolor sliver pencil.

The shiny surface can be seen a bit better in this rather poor quality shot. The engine has also been fixed in place at this point. 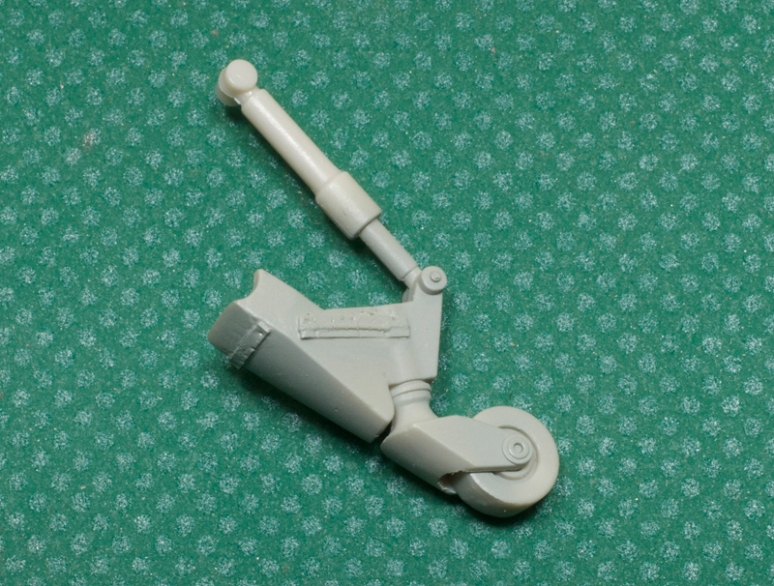 Because the kit’s tail wheel is made to actually retract, Tamiya has left off its very prominent sealing boot which would interfere with its operation. I wanted to include this feature so some tiny attachment brackets were made from thin plastic strip and glued in place. The tail wheel was then permanently fixed in the fully extended position and the sealing boot was added by filling the gap around it with Milliput. Then, with the aid of some good reference photos, the putty was sculpted into the appropriate shape. 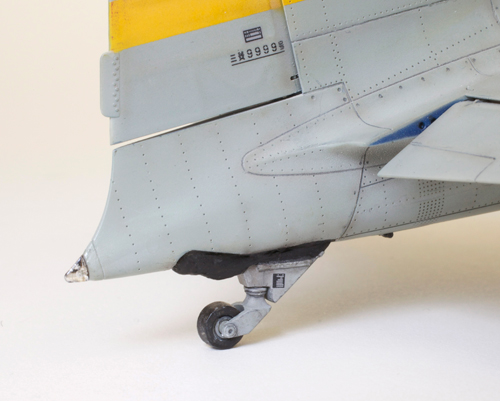 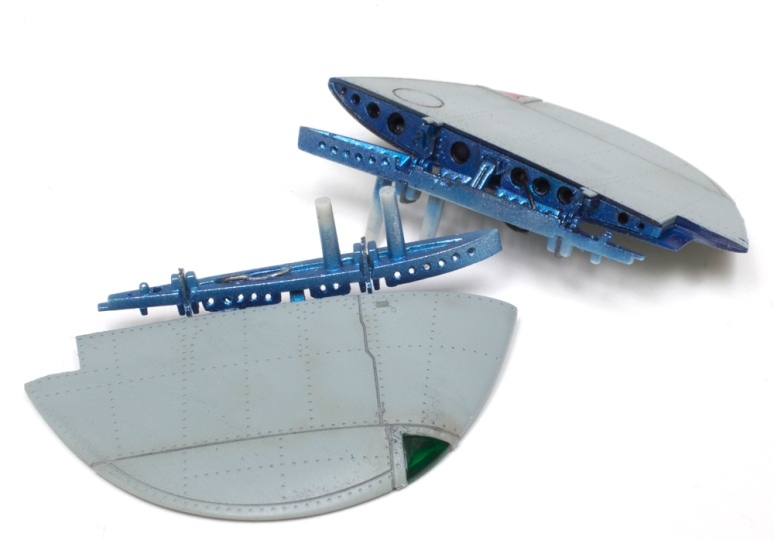 Folded and extended wing tips are provided and can be easily interchanged. These are the folded tips. 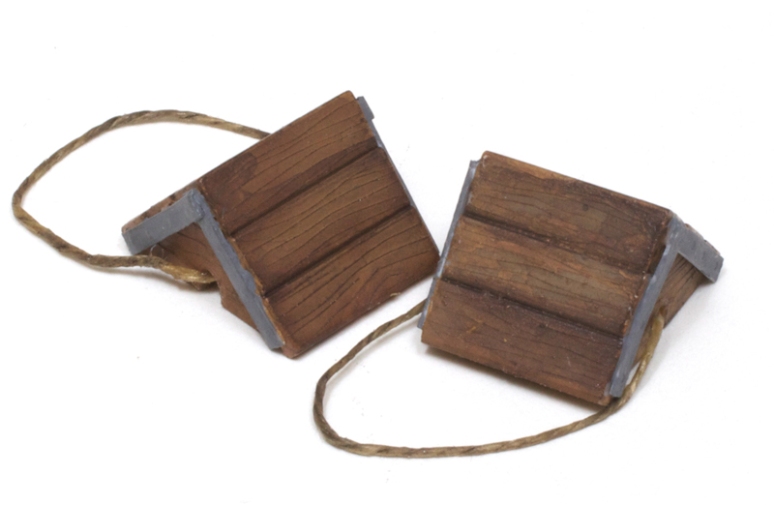 Two sizes of wheel chocks are supplied, these larger ones are to be placed in front of the wheels while there are smaller ones to be placed at the rear. I could’t find any photographic evidence of the smaller rear chocks being used so I only finished the larger front ones. I added some extra detail by cutting a simple wood grain texture into each panel with the tip of a scalpel; adding end cap plates from plastic strip, and replacing the rather thick white string supplied in the kit with a much finer, smooth cord. 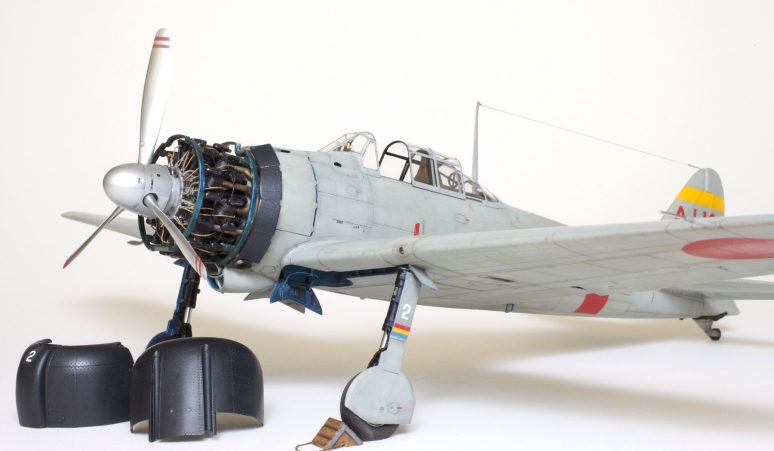 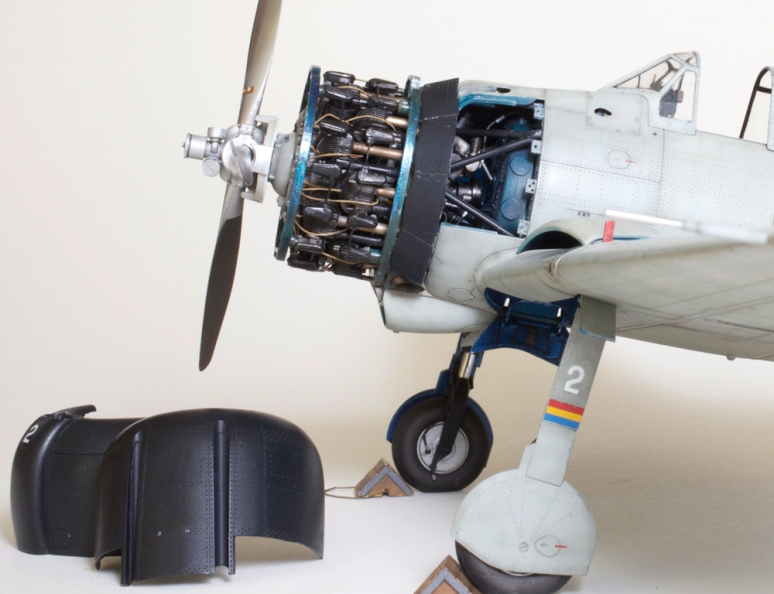