The Enigma was a modified  T-55 that was encountered on several occasions by Coalition forces during Operation Desert Storm. The modifications to the original Russian design consisted of hollow steel boxes that Iraqi Army engineers had welded and bolted to the tank’s turret and hull in an attempt to add more armoured protection to its most vulnerable areas. This was not entirely successful, however, as it seems all but three or four of the Enigmas encountered were quickly despatched. 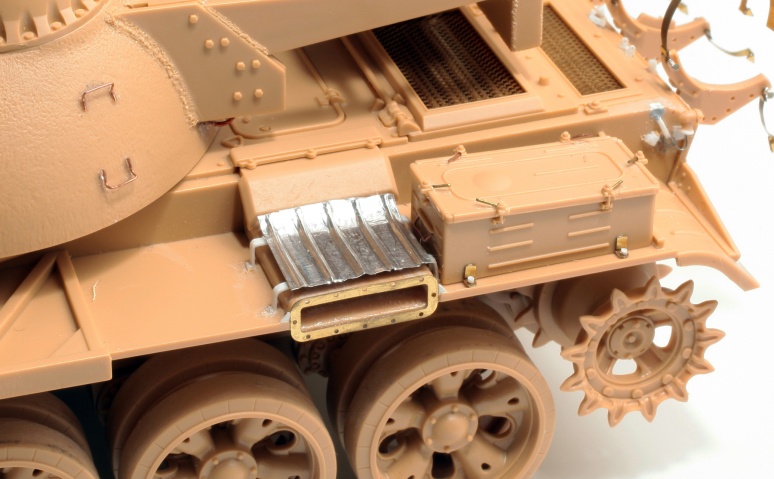 A lot of extra details were added to the model. These included the Eduard P/E set designed for this kit, Aber’s turned aluminium gun barrel, as well as many scratch-built items.

One of the more elusive details peculiar to this vehicle was the locking mechanism for the hinged portion of the turret armour. I’m not sure that my attempt at replicating this is entirely accurate, but it’s the best I could manage with the available reference. 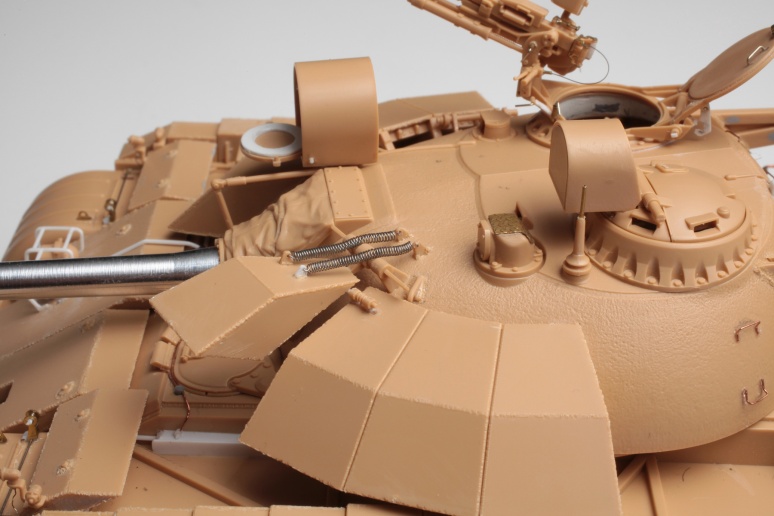 The kit’s moulded springs for the hinged armour section were replaced with new items made by coiling fine copper wire around a brass rod of the appropriate diameter. This took a few attempts, but the end result was worth the extra effort. 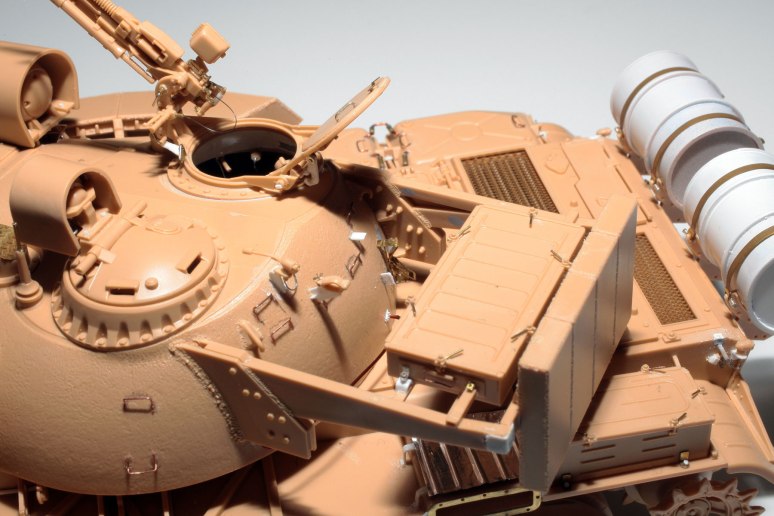 The rear of the turret received lots of extra bits. These were mainly modified kit parts with some scratch-built items. The rather crude weld seams where the rear bracket is attached to the back of the turret can be seen here. These were made by gluing stretched sprue along the joins using lots of liquid cement. While the plastic was still soft the texture was created using the point of a needle.

The same goes for the rear end but this time the additions were mainly P/E with a lot of scratch-built bits. 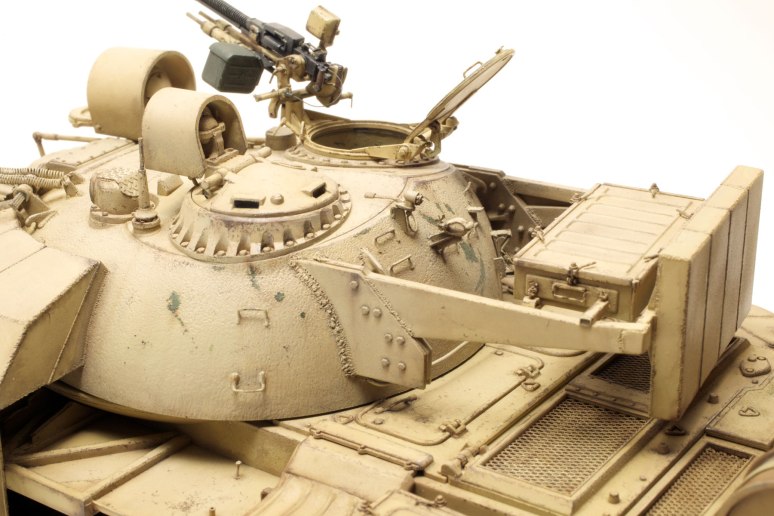 In this shot of the finished model the rough weld seams can be seen more clearly. Also visible are lots of small scratches and wear, which were added using very sharp colouring pencils. The Dushka and its mount also received quite a bit of extra detail.

Oil staining on the wheel hubs was achieved using a fairly heavy black/brown oil paint wash. I was also very happy with the rubber look of the tyres and the P/E mud flaps.

Visible in this shot are the lenses added to the commander’s hatch vision ports and the scratch-built latch hook on the gunner’s hatch lid. 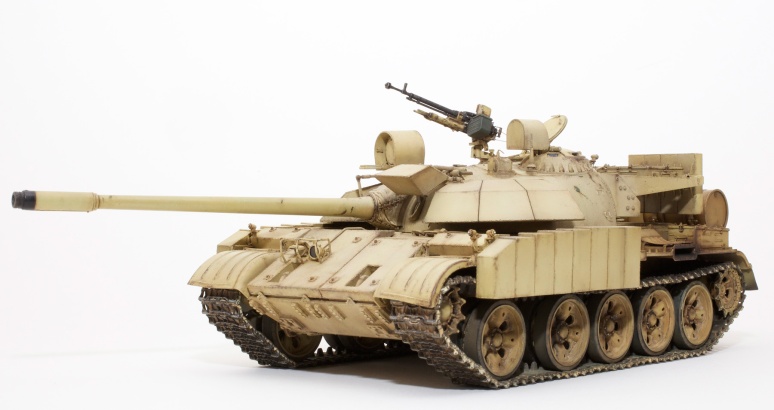 ADDITIONS AND ENHANCEMENTS MADE TO THIS MODEL

Hasegawa 1/32 Bf 109 F-2 from 9./JG 2 carrying the markings of Staffelkapitan Siegfried Schnell while on Channel coast duties in France, 1941.

New photos and the original build shots of a model which I completed back in 2011.

Cockpit interior complete, just waiting for the installation of the instrument panel and seat. 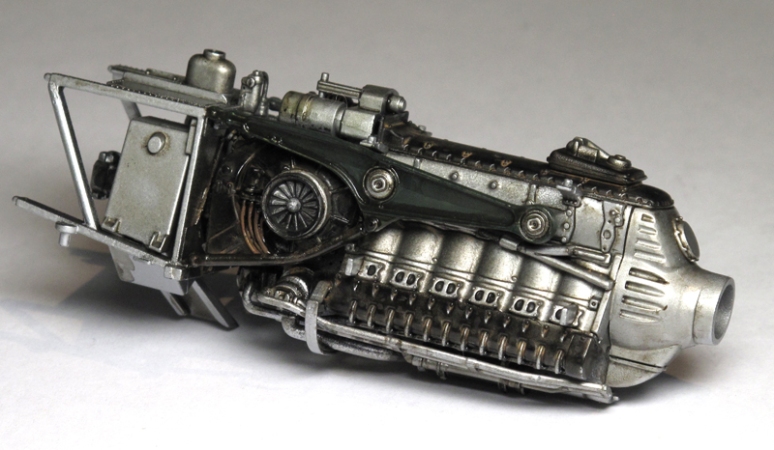 Even though it was going to be concealed behind closed cowlings I still gave the beautiful little Junkers Jumo 213E engine a quick paint job.

Cockpit and other interior details are fixed in place. 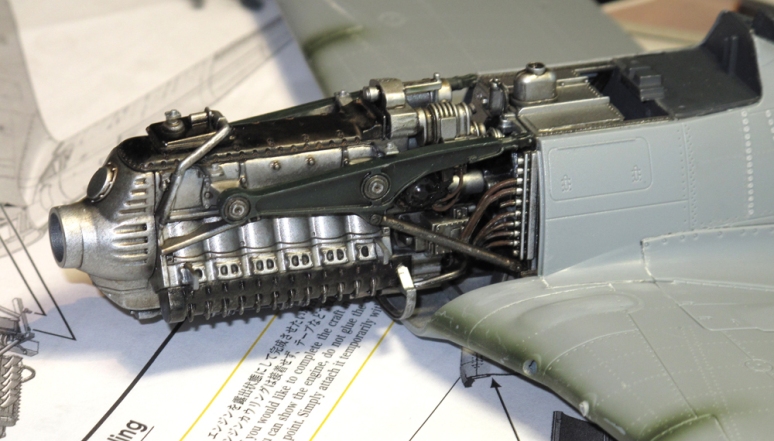 Once the main construction was complete the engine was attached to the front of the fuselage.

This shot shows some of the extensive riveting that was added to the entire external skin of the model.

The application of the main camouflage colours. Undercarriage and various other smaller parts have also been painted and weathered.

Mottling, Reich defence tail bands and some weathering have now been added.

Decals are now in place. They represent the markings of a JG 301 aircraft flown by Oberfeldwebel Willi Reschke.

A better shot of the lower surface riveting. 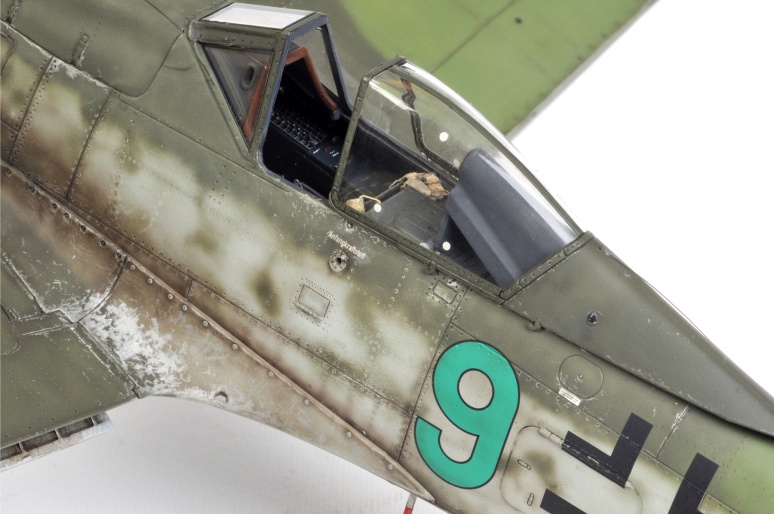 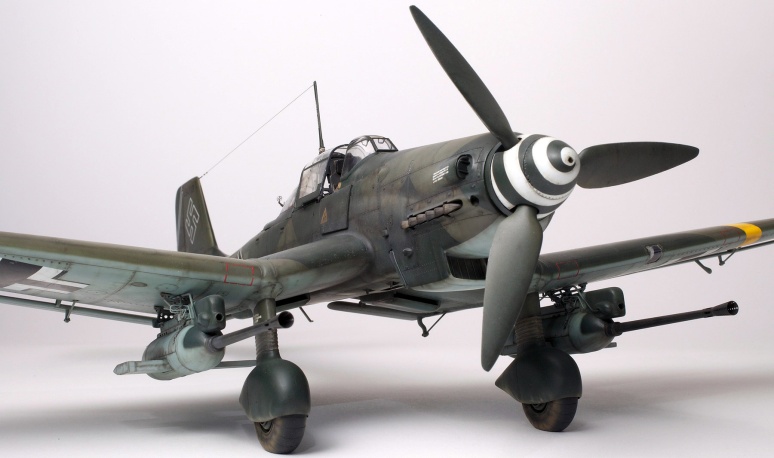 My latest build is a commission job and my client supplied me with the EagleCals decal sheet EC#97 containing the markings for Hans-Ulrich Rudel’s last Stuka. He requested that I build the plane in these markings. 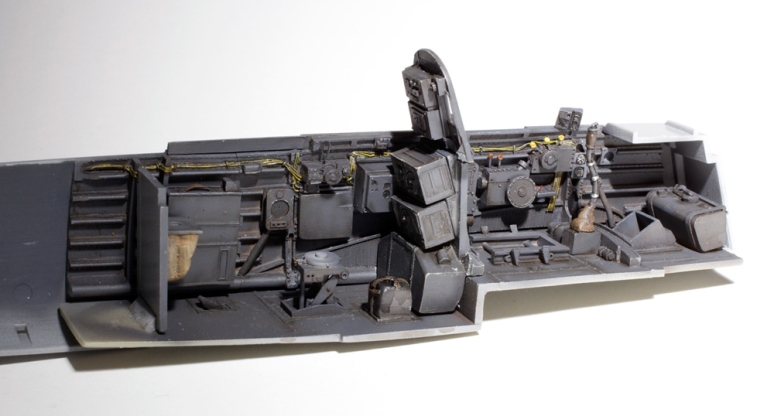 He also supplied me with the Aires Resin cockpit set. Rudder pedals and seats have yet to be installed in this shot.

The kit instrument panel was used in preference to the P/E item in the Aires set. The dial faces were cut from the kit decal sheet and applied individually. Once set, a drop of gloss clear was placed onto each dial. 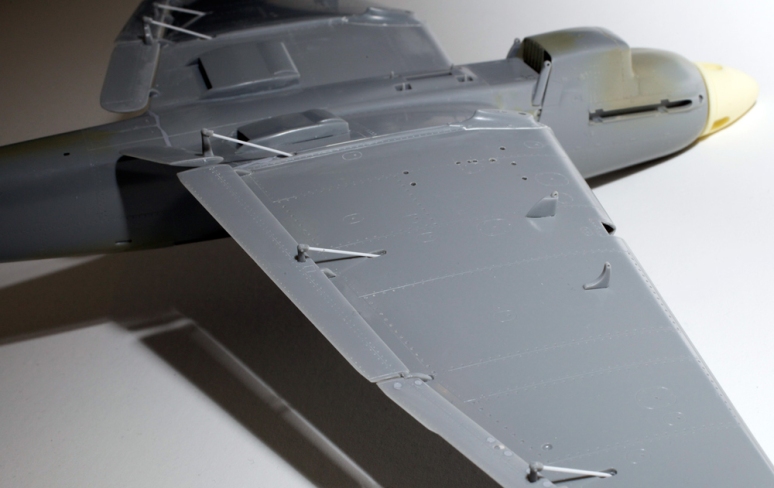 The kit’s push-rod arms were replaced with Evergreen plastic rod. The Voyager prop spinner can also be seen in this photo.

I chose to glue the supercharger flap closed which required two small hinge brackets to be attached to the back of the door. 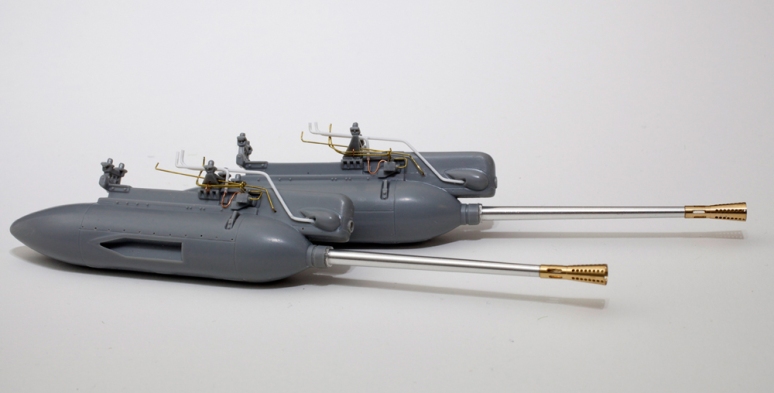 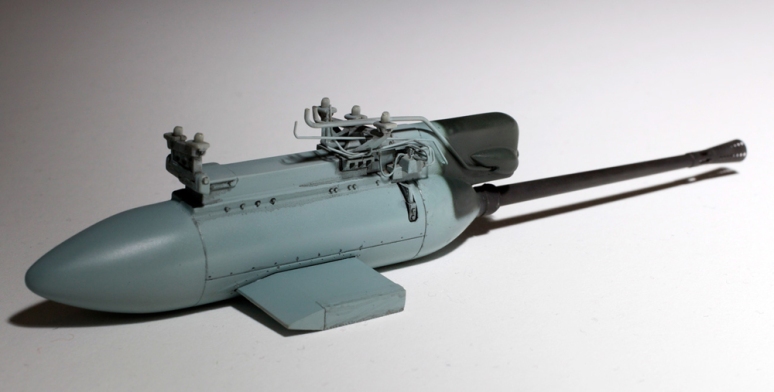 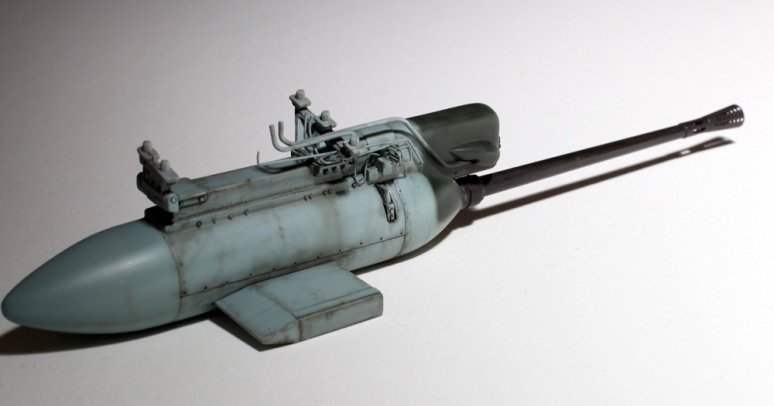 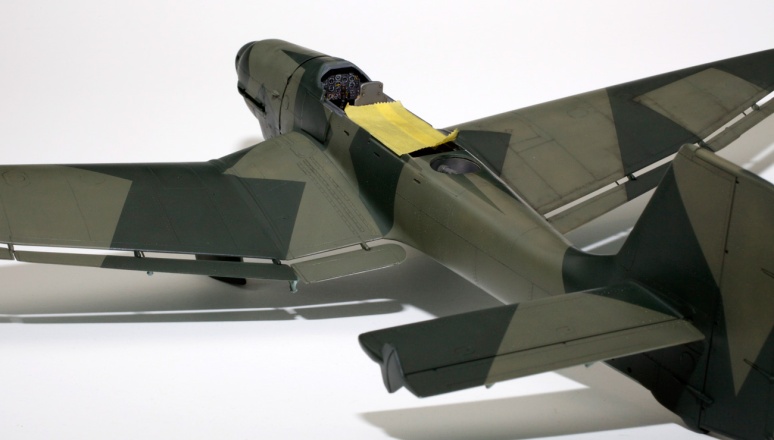 Upper and lower surface weathering has now been applied. 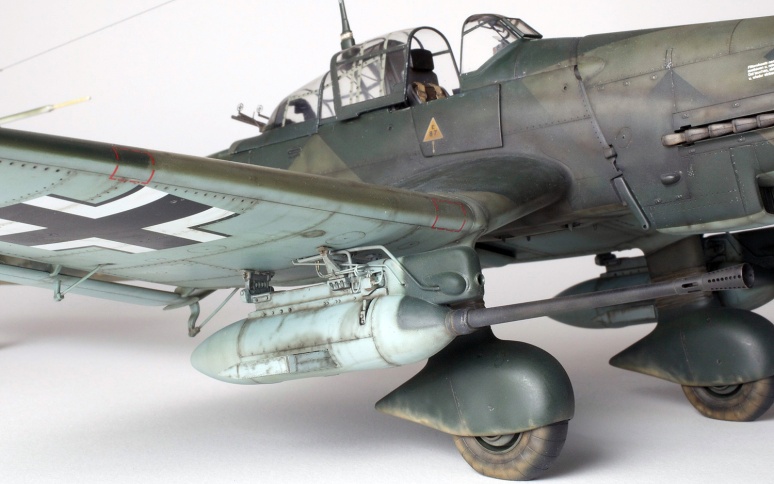 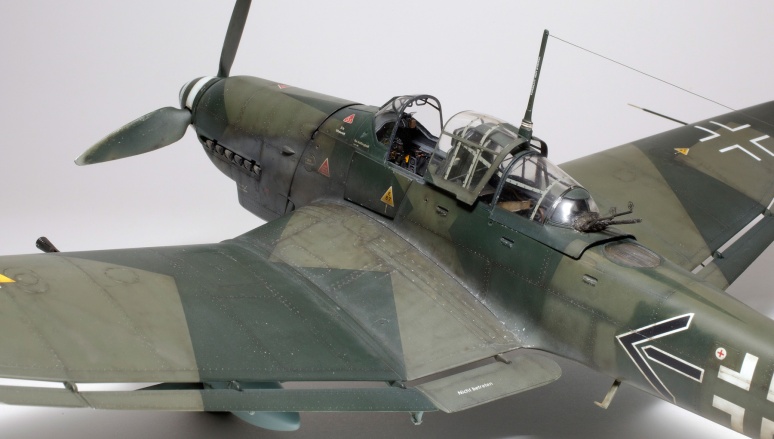 Four shots of the completed model.

This is the 1/48 scale Hasegawa Ki-45-KAI in the markings of the 3rd Chutai/53rd Sentai based at Matsudo airfield, November 1944. 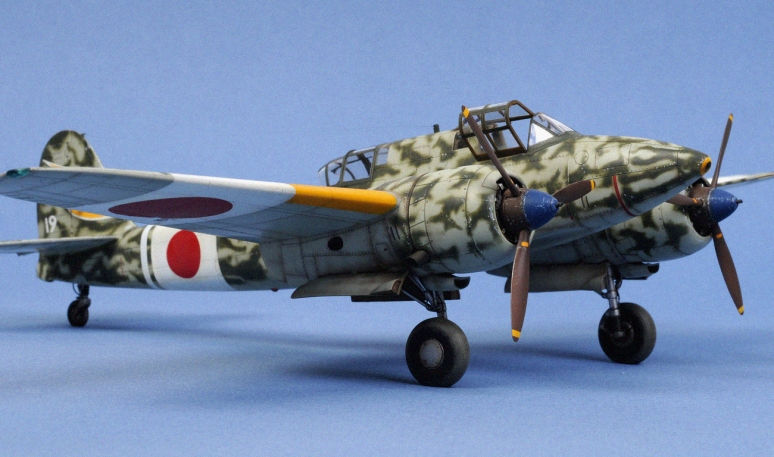 A full build article of this model appears in March ’09 issue 161 of Tamiya Model magazine.

I have added a bit of grain to these photos through Photoshop just to take away that ‘digital sharpness’.

This was a commission build of one of my favourite I.J.A. aircraft. 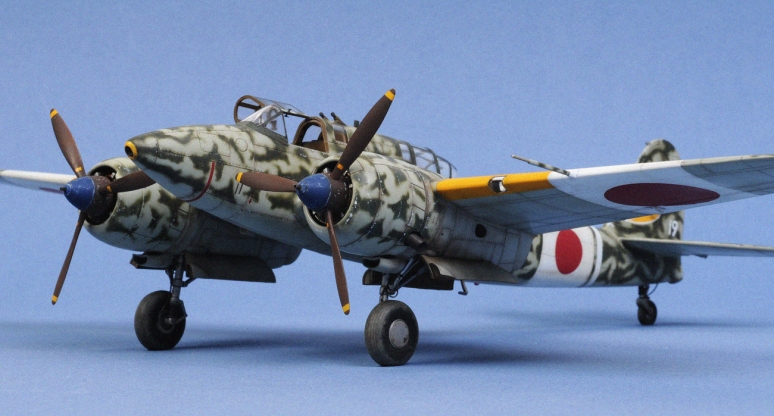 This is a beautiful kit with virtually no vices. (None that I can remember anyhow.) 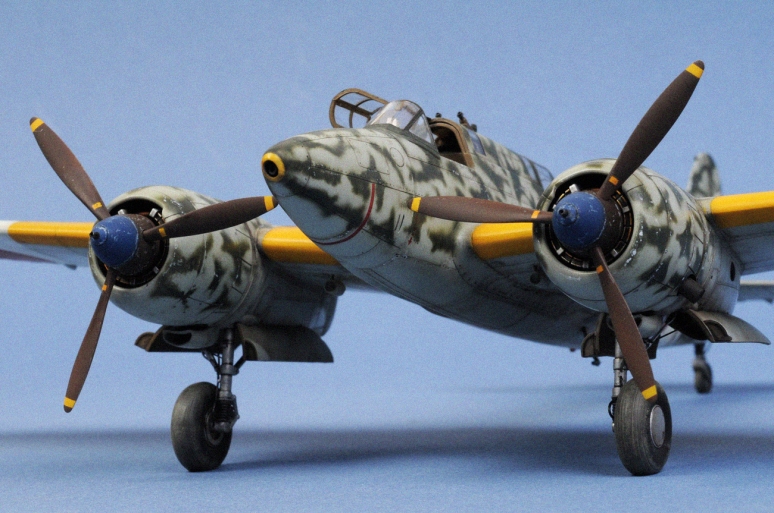 Hydraulic lines were added to the undercarriage legs and an ignition wiring harness was added to the front of each of the Ha 102 engines. 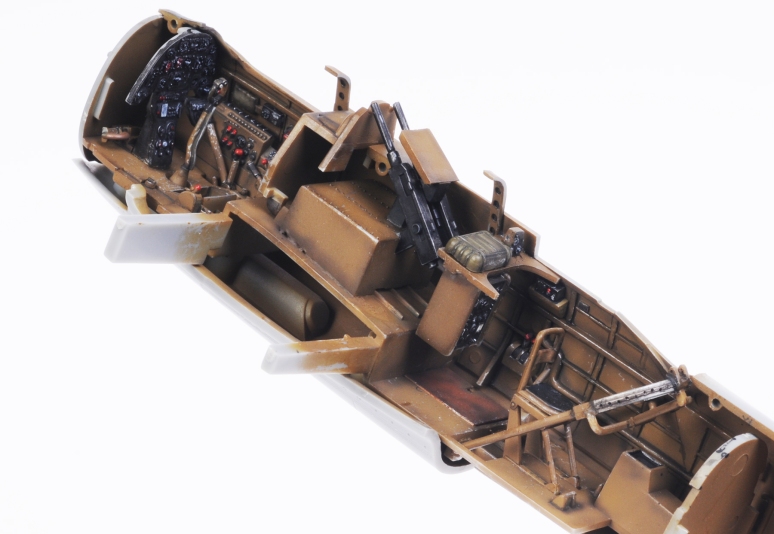 The interior is straight out of the box. I think I probably added a simple scratch-built harness to the pilot’s seat but can’t be sure.

I was so impressed with this kit that I built one for myself.

I built this one in the colours of the aircraft flown by 1st Lt Takumi Yamamoto of the 8th Hakkou-tai, ‘Kinnou-tai’, Special Attack Squadron, based at Nielsen Air Base in the Philippines.

Lt Yamamoto flew this Toryu on its Kamikaze mission on December 7th 1944. This and eight other Nicks were destroyed while attacking U.S. forces in Leyte Gulf.

I built this kit back in the ’90s when it was first released. At the time I was very proud of the result which, if memory serves me correctly, won me a first place trophy at my local IPMS monthly competition.

After sitting in open shelves for a dozen or more years the old girl was looking pretty dusty and sad but still relatively intact so I decided it was time for a facelift.

The type of scheme that I chose was one that had fascinated me for many years—ever since the mid ’70s when I purchased a slim publication on the Arado Ar 234 which contained a photo of a rather battered Ar 234 standing in a damaged hanger at Manching airfield. Behind this aircraft are standing three Ju 88 G night fighters, two of which have their tails painted with this rather peculiar, dark outline. I always assumed that this paint job was done in an attempt to fool Mosquito pilots into believing that they were in pursuit of an earlier marque of this aircraft or even another Mosquito and the ensuing, if only brief, moment of confusion gave the Luftwaffe pilot time to make an escape. I have never been able to find any other explanation. 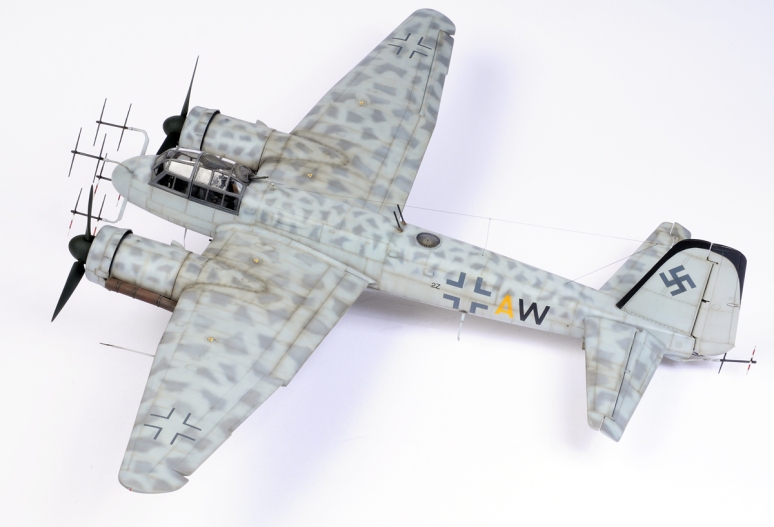 After a careful but thorough clean-up of the model and the removal of the old decals the search commenced for some markings. Fortunately Brett came to my rescue by giving me an old set of Ministery of Small Aircraft Production decals which contained the markings for an aircraft carrying this scheme. I can’t remember which NJG this plane belonged to and as I have not been able to find any pics of this subject the paint job is purely speculative. The model was painted in a typical scheme following the method that I believe was used for many late war Luftwaffe night fighters, this being RLM76 lower and vertical surfaces, and a solid coat of RLM 75 Grey Violet on all the upper surfaces and canopy frame. The 76 Light Blue was then sprayed over the Grey Violet leaving irregular patches of the darker colour. These darker patches were toned down a bit with a thin overspray of the RLM76. The tail was carefully masked using Tamiya masking tape  and the dark silhouette was then sprayed black. A very thin mix of Tamiya Flat Black and Red Brown was then applied to all panel lines and very gradually built up to form the heavier exhaust and gun dust staining.

The decals were applied and once set the entire model was given a coat of flat clear and she was done. Hope you like it. 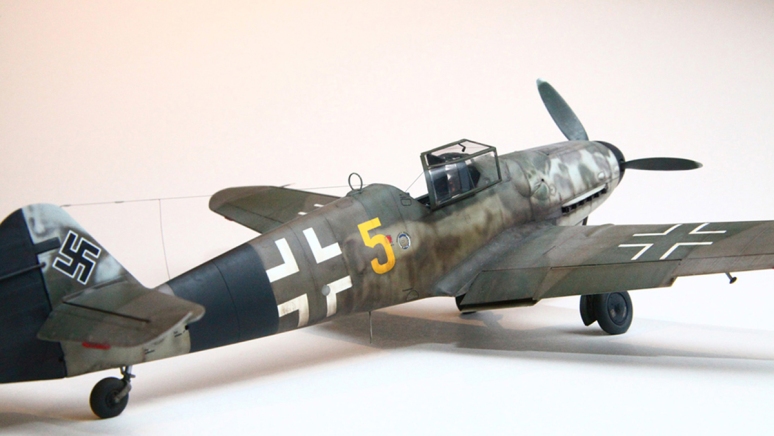 This is a test shot of Revell’s new 1/32 Me 109 G-6. The model was built straight from the box by Brett Green and painted and weathered by me. I did add a few enhancements which included a new D/F loop, an FuG 25a ventral aerial, a new wire on the end of the Morane aerial mast, the canopy’s locking handle and retaining wire (with tension spring), the grab handles on the inside of the windscreen frame and the radio aerial wire.

Decals were sourced from Eaglecal and slightly modified to represent a JG 53 Bf 109 G-6/U2 found by advancing American troops at the Henschel Aero Engine Works in Attenbaum near Kassel. I assume that if it was based there it was probably performing factory defence duties or maybe it was just there having a new engine fitted; which I think is the more likely scenario due to the mismatched camouflage on the engine cowling. There are a couple of odd inaccuracies with this kit but these will be dealt with fully by Brett in ADH’s new ‘How To Build’ book (below), which is due out soon and will feature this and at least three other full builds. 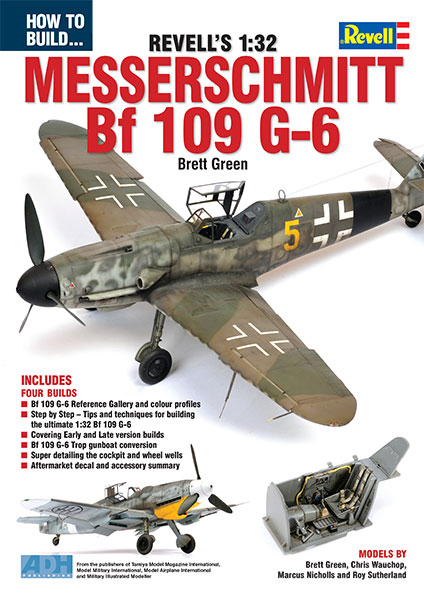